How does soil management affect seepage and what are the most appropriate measures for reducing nutrient loads, mainly from nitrate and phosphate?

To assess these topics the Institute for Land and Water Management Research (BAW-IKT) built several lysimeters for seepage investigations in Upper Austria more than 20 years ago. The equipment is located in agricultural fields managed by local farmers. wpa has been responsible for coordinating the investigations, interpreting the results and reporting since the year 2000.

Some of the findings are:

On a multi year term nitrate leaching is mainly controlled by the nitrogen balance. If manure is applied its organic as well as inorganic nitrogen have to be taken into account for matching the N-balance to nitrate leaching.
On loamy soils fertilizer amounts were usually well below legal limits (which in Austria are linked to amounts harvested). This led to a nitrate concentration in seepage below acceptable limits.
On a sandy gravelly soil, where chicken manure had been applied during several years (but stopped when the investigation started) rapid increase of soil temperature obviously led to a mineralization of organic nitrogen and increased nitrate leaching, which in most years could not be kept below acceptable limits in spite of catch crops and only moderate fertilizer application.

Annual patterns of nitrate leaching were typically controlled by the kind of crop. Under winter wheat, winter barley or winter rape nitrate loss increased during autumn to a maximum in December and decreased afterwards to a minimum in June. Under maize maximum of nitrate leaching occurred in June. The conclusion is that winter cereals should not receive N-fertilizers in autumn and maize should not receive major amounts of fertilizers too early, as N-uptake just starts after middle of June. 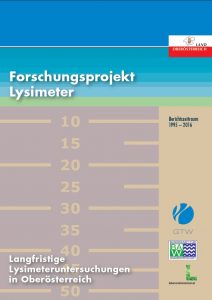 Read more about the project! (Only in German available)